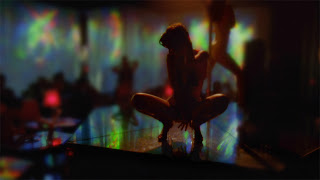 0. Uncle Boonmee Who Can Recall His Past Lives (Apichatpong Weerasethakul)
I have yet to see this most acclaimed film by Thai maestro Apichatpong Weerasethakul. But considering the admiration I have for all his previous features, especially Tropical Malady and Syndromes and a Century, there is very little doubt that it will be featured in my top in 2011 (if I live that long), and should be acknowledged here as the 'grand absent.'

1. Enter the Void (Gaspar Noé, 2009; pictured)
Noe's magnum opus, an incredibly daring and innovative epic of garishness, represents all the obsessions that the filmmaker has carefully sketched out in his two previous features, Seul contre tous and Irreversible. Part homage and recreation of the notion of 'ultimate trip' of Kubrick's 2001; part descent into the gutter of mankind under psychedelic neon lights, the film's hubris is bound to irritate but it must win one over in the ultimate account. In this sense, one of the most amazing features of Enter the Void is how the bad-taste of each consecutive scene makes one cringe, before gradually imposing its aesthetics and earning its full artistic integrity. Blending the basest and the loftiest in a somatic bouquet superbe, Noe has delivered just about the pen-ultimate trip, falling only a little short of his 1968 model - but then again, he never really aimed that high, embodying all that's great about the degraded postmodern culture and ethos suddenly transcending itself, reaching the top by going down to the bottom, as it were.

2. Amer (Helene Cattet and Bruno Forzani, 2009)
One of the greatest first films ever made, this surprising giallo pastiche and homage from Belgium, by French filmmakers Cattet and Forzani, is an hymn to the senses. See my review of the film here.

4. The Illusionist (Sylvain Chomet)
Chomet yields a cinephile's wet dream by adapting Jacques Tati's script, preserving his specific rhythm and poetry. The result is a loving, respectful, beautiful and nostalgic evocation of a bygone era as well as a recreation of a whole cinematic universe, hardly altered by a 21st century lens. A rare feat, The Illusionist is as much Chomet's as it is the great master's - and the way it reflects on Tati's misunderstood genius and the sad end of his career is bound to move one deeply.

5. Hadewijch (Bruno Dumont, 2009)
It is better not to say anything about Hadewijch, Dumont's most Bressonian effort, a momentous effort about extremely timely issues in present-day Western Europe, which uses the ellipsis in a more masterful manner than any of the French trans-modern provocateur's film to date. While the second half of the film is slightly inferior to the first one (which is quite perfect in its controlled austerity), and paradoxically less relevant on the socio-philosophical plane, it is also the part in which Julie Sokolowski's titular performance shines through most compellingly - her flat, somewhat chubby face blessed with beautiful and sensitive eyes, a germane canvas for madness and Grace.

6. The Strange Case of Angélica (Manoel De Oliveira)
Still going at 100+, Oliveira graces us with this carefully crafted jewel of a film, based on what would look like a short film's argument, but developing and flowering in unexpected and seductive avenues throughout. Based on a script he wrote in the 50s, Oliveira seems particularly at ease in this Bunuel meets Max Ernst tale of a Sephardic re-immigrant in a not-so present day Portugal, still heavily anti-Semitic and insufferably bourgeois. Among its many enchanting aspects, the film marries an inescapably cinematic metaphor (cinema as mode of embalming reality and bringing it back from the dead, sometimes to a dangerous degree) with a subtle-and essential-investigation of Jewish culture's oft-overlooked role in Western European culture, especially as regards esoterism. It is a bit disheartening, however, to think that one of the year's finest films is the product of the medium's eldest practitioner...

7. White Material (Claire Denis, 2009)
Denis' superb and earnest evocation of the chaos in a generic Central-to-Western African country torn by civil war is particularly poignant, as it features more than a few autobiographical elements for its author, who grew up there. The result is a cross-breed between a dark fairy tale (the massacre of the children being the most obvious example) and a quasi-documentary assessment on the huge socio-political mess that the black continent has tragically become. While Isabelle Huppert is her customary brilliant self, her dry physicality and faded beauty a perfect analog for the ravaged African country's predicament, Christophe Lambert's grotesque performance as her former husband, sadly, prevents the film from achieving an even higher degree of success overall. Amateurish or bad acting had already marred Denis's previous films,including last year's 35 Shots of Rum. But the French filmmaker's earnestness and love of Africa shines in each shot, each one filled with another layer of despair.

8. Cargo 200 (Alexey Balabanov, 2007)
Balabanov's film came out a few years ago in Russia, but deserves to be featured in any a top ten list. A fantastic combination of the horror genre and the dark social satire, it investigates an 1980s Soviet Russia in shambles (a few weeks prior to Gorbachev's coming to power and initiating the much needed reforms of Perestroyka and Glasnost) and rotten to the bone; Cargo 200 also points out the fact that it is the shrewd, selfish (and cowardly) golden youth of the 80s that now runs the show in the present-day Russia of oligarchs and Czar Vladimir P.

Surely Lankosz's film can only be fully appreciated by a Polish (or Polish culture and history savvy) audience, rife as it is with socio-historic references that will be lost on anyone who did not have a few family members suffer, be incarcerated, or die during Stalin's rule of terror - that other darkest hour which prolonged the horror of WWII in Eastern Europe for a good 8 more years. Andrzej Bart's fabulously witty dialogues and the film's gorgeous black and white cinematography constantly positing the demons of history in a dark and cruel ironic light. And indeed, when one thinks that Warsaw's most iconic present-day monument remains the once infamous Palace of Culture (Stalin's late gift to the ravaged city), whose building serves as an important plot point in this film (again, lost on anyone without the socio-historic background), it seems like Lankosz's caustic treatment has become a better way for Poles to look at their martyrdom than the recent score of not-so-successful straight-faced hagiographies (which do, however, serve a didactic purpose of some sort, no doubt, shedding some new light on a few of the many dark corners of Polish history).
10. The King's Speech (Tom Hooper)
This obvious Oscar-candidate won me over, in spite of its co-opted nature, by its production values and deft screenwriting, making it one of the least dull efforts in the period piece/biopic genre in years, thanks in no small part to the extraordinary cast. As an added guilty pleasure, one will note the delightful obscenity of focusing on a man's speech impediment as millions of people were getting ready for the slaughter of World War II. But this parapraxis only makes it all the more pithy, as it will no doubt will be lost on the thousands of elderly bourgeois citizens who will swarm to see the film in this holiday season, and relish every second of it -while, unbeknownst to them, digital projection replaces 35mm and cinema dies its slow and tragic death.
Honorable mentions: Black Swan, True Grit, Piranha 3D, Kick-Ass
Posted by Michael J. Anderson at 8:50 AM