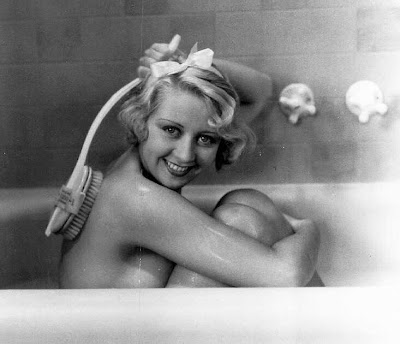 Blonde Crazy (Roy Del Ruth, 1931, Warner Bros.)
When Andrew Sarris claimed that Casablanca (1942) was "the most decisive exception to the auteur theory," clearly he had forgotten Roy Del Ruth's Blonde Crazy. Roy Del Ruth? Del Ruth's direction here borders on the genuinely experimental with his recourse to fantasy in a sequence strung together with multiple super-impositions, and in the elan of his overhead mobile framing of a local jail. Add to this Kubec Glasmon and John Bright's sparking dialogue - again, who? - and the charismatic, wise-cracking performances of the great James Cagney and Joan Blondell, and Blonde Crazy surely rates among the greatest Hollywood films of a lesser artistic pedigree.

Bombshell (Victor Fleming, 1933, M.-G.-M.)
A highpoint in Pre-Hays Code-era self-reflexivity, Bombsell involves re-shoots of the prior Victor Fleming-Jean Harlow smash hit Red Dust (1932), with the latter playing herself in this portrait of the perfectly vacuous star, Lola Burns. Harlow's Burns, however, is no match for Lee Tracy's epically manipulative press agent, who orchestrates Burns's contact with and exclusion from proper society. Fleming's direction, with the exception of a Trouble in Paradise (1932)-brand opening montage that confirms Burns's stardom, is very clean and classical, frequently motivated by figure movement within the frame. Bombshell is quite conceivably Fleming's best film. 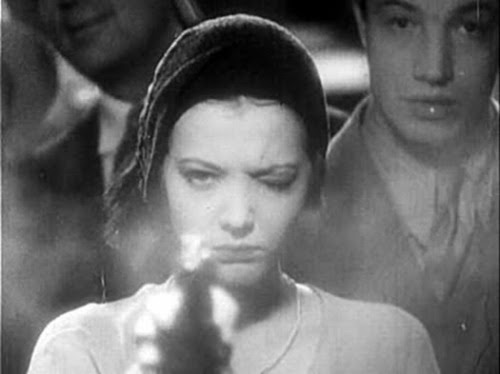 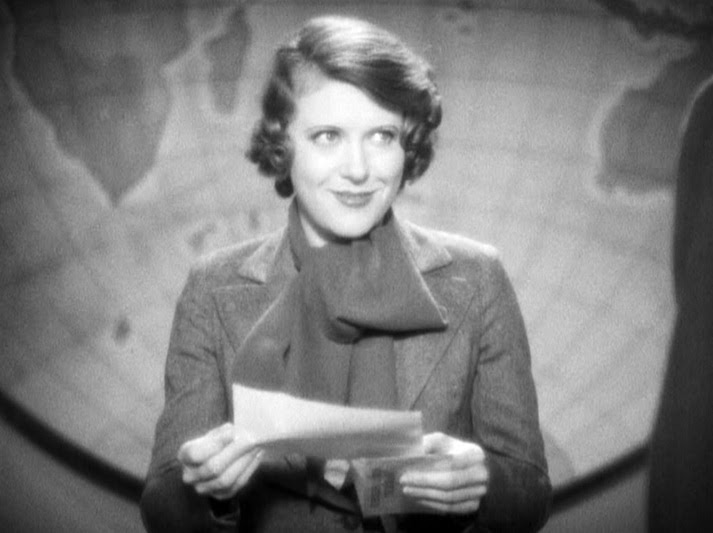 Female (Michael Curtiz, William Dieterle and William A. Wellman, 1933, Warner Bros.)
There were amoral films made during the Pre-Code era and then there were amoral films. This Michael Curtiz signed picture (he was responsible, purportedly, only for the re-shoots, with William A. Wellman directing the majority of the film's scenes) certainly fits in the latter category, with Ruth Chatterton's auto executive callously seducing her more dashing male employees - she serves her pursuits vodka to "fortify" their "courage." In the end, Chatterton's exec opts for love over business, providing an unexpectedly conventional conclusion to what had been otherwise substantially radical stuff. Plus, and this is a very big plus, Female features extraordinary locations shot at Frank Lloyd Wright's Ennis Hose.

Hallelujah, I'm a Bum! (Lewis Milestone, 1933, United Artists)
The strangest film on this or really any list, Lewis Milestone's career peak is also one of the best. With its sing-song dialogue, moments of microscopic, Eisensteinian montage, extremely mobile framing, and frequent looks into the camera, Milestone throws off virtually every popular cinema convention of the capitalist society that Hallelujah, I'm a Bum! seeks to critique. Gleefully supportive of life on the bum, Milestone and screenwriter Ben Hecht's opus advocates for a communal life and free moral system that clearly resides outside of American norms. Hallelujah, I'm a Bum! is likewise noteworthy, though far more trivially, for providing one of the oddest understandings of amnesia ever committed to the screen. 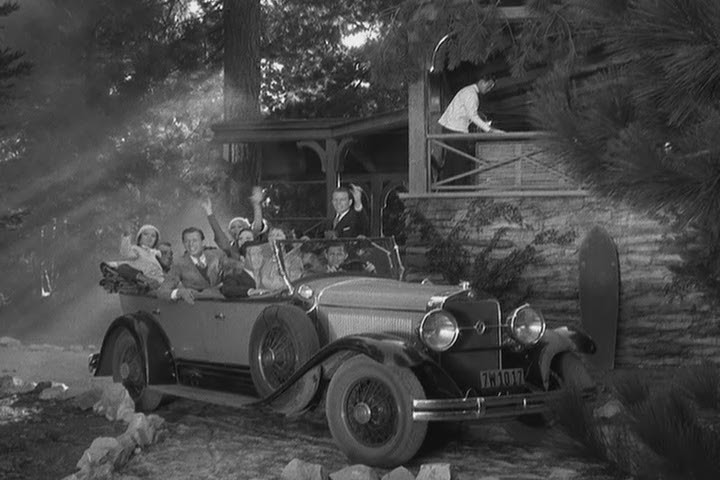 Hot Saturday (William A. Seiter, 1932, Paramount)
Of all the films cited on this list, Seiter's Hot Saturday excels every other in its singular expression of place: here, a presumably Southern small town, surrounded by pinewood forests and pristine lakes, lensed gorgeously, especially in the deep dark of night, by Arthur L. Todd. The under-appreciated Nancy Carroll (see also The Man I Killed) and a rather young, and of course, quite dashing Cary Grant co-star in this portrait of small-town bigotry, which in this instance leads to a convincingly modern conclusion. But it is the careful construed atmosphere that most stays in the mind, making this one of the first films among the ten that I am looking forward to revisiting.

Me and My Gal (Raoul Walsh, 1932, Fox)
Were I pressed to recommend a single film on this list, Me and My Gal would be it. Walsh's film is deliriously playful in its usage of nascent sound technologies: we get self-assured, gum-chewing dialogue from the film's exceptional leads, Spencer Tracy and Joan Bennett; a mute witness to the film's crimes; and most spectacularly, internal monologues spoken in conversation, spoofing 1932 experiment Strange Interlude. It is moreover an absolute genre mash-up combining elements of romantic comedy, vaudeville and the gangster film, among others. Indeed, it becomes ever clearer that Walsh's best work was in the gangster film, whether it was Regeneration (1915), The Roaring Twenties (1939), White Heat (1949), or perhaps the greatest of all his films, Me and My Gal.

The Old Dark House (James Whale, 1932, Universal)
One of the genuinely great Universal horror titles of the Pre-Code years, The Old Dark House first off offers up a cast unrivaled among those works mentioned on this list: Boris Karloff, Melvyn Douglas, Charles Laughton in his first American film, Raymond Massey, and the very alluring Gloria Stuart, a mere sixty-five years before her appearance in Titanic. Second, The Old Dark House provides unparalleled atmosphere in its secluded, hillside mansion, stumbled upon by a group of travelers stranded by a torrential, nocturnal downpour. Third, there is the film's distinctly terrifying denouement, this is one of Whale's scariest films... 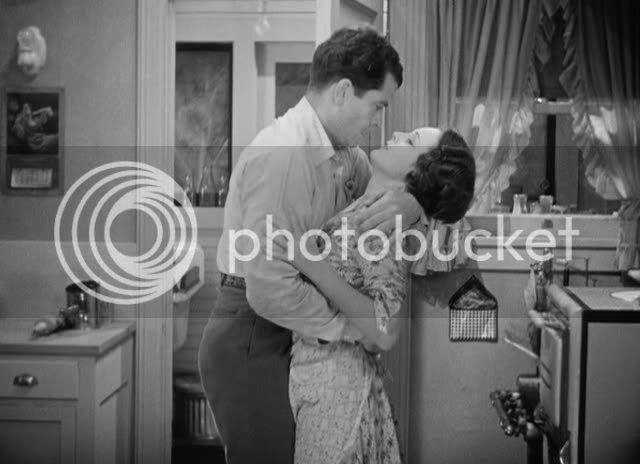 Other Men's Women (William A. Wellman, 1931, Warner Bros.)
The Pre-Code auteur discovery of 2009, thanks in no small measure to Turner Classics's Fobidden Hollywood, Vol. 3 box-set, is undeniably William A. Wellman, whose work in this period (see for example also Female, Wild Boys of the Road and Heroes for Sale; all 1933) seems to qualitatively dwarf his overall output in the coming two decades. Other Men's Women in particular rates among the better films of the era, with its displaced memory of the First World War - in the person of its wounded veteran - the sexual energy suggested by the film's title, and most remarkably of all, its sense of the kinetic: as in Wild Boys of the Road, Wellman closes his film with a pure expression of movement that as always expresses the very nature of the medium.

Note: The ten films selected were each pictures that I saw for the first time in 2009. Many are available on DVD and/or screen regularly on Turner Classic Movies. Because I am limiting myself only to first time viewings, I have not included anything by Howard Hawks, Josef von Sternberg, John Ford, Frank Borzage, and so on, along with only a single title by Ernst Lubitsch. Were I doing a proper Pre-Code top ten, one could be certain that my list would be heavily represented by the aforesaid directors. For further favorites, see my ten best lists of the 1930s.
Posted by Michael J. Anderson at 11:05 AM

Great list. Particularly happy to see Walsh's Me and My Gal getting the praise it deserves.

Some excellent choices.
"Blonde Crazy" is a particular favorite. Great dialogue and two wonderful performances by Cagney and Blondell. I wrote a review earlier this year which you may want to check out http://twentyfourframes.wordpress.com/2009/01/02/blonde-crazy-1931-del-ruth/


The Old Dark House and Other Men's Women are also great choices. Wellman may have been at the peak of his career durining the pre-code period. His output was amazing.

I was looking for a selection of PreCode movies to prepare myself a miniretrospective. Your list fits perfectly

this really informative articles and blog. the information about the classic movies is really great.